No matter how big or small, every achievement deserves its moment to shine.

Goals are set. Hours of training, practice, and performance have been calculated. Anticipation builds as the months pass. Everyone is waiting to see whose name will be added to the perpetual award displayed in the front office. Levy Recognition specializes in designing custom awards that live up to the excitement a coveted award can bring year after year. Our perpetual awards are artfully crafted to stand the test of time.

Perpetual awards can be as intimate as a small plaque on the wall or as ornate as a large trophy in a display case. Most award designs feature blank metal nameplates that allow new award recipient names to be added in the future. Others allow the recipient names to be engraved directly onto the award. Perpetual awards are a great option for businesses wanting to show continuous recognition to employees. Multiple award recipient names are displayed within one award, demonstrating the team impact each of the individual employees had. Businesses utilize perpetual awards to recognize top sales associates, employees of the month and longstanding employees for their years of service; for they allow individual acknowledgment of your employee’s success but also unit your team as one in their overall success through the years.

Perpetual awards are ongoing symbols of hard work, talent and years of commitment. They are given to those who rise above their competitors to achieve more than expected. Recipients gain feelings of pride and accomplishment. Whether earned as an individual, or as part of a team effort, an openly displayed perpetual award has the power to inspire and bring organizations together. These awards create images of greatness, community, and strength.

That is why perpetual awards are a popular way to recognize athletic achievements. 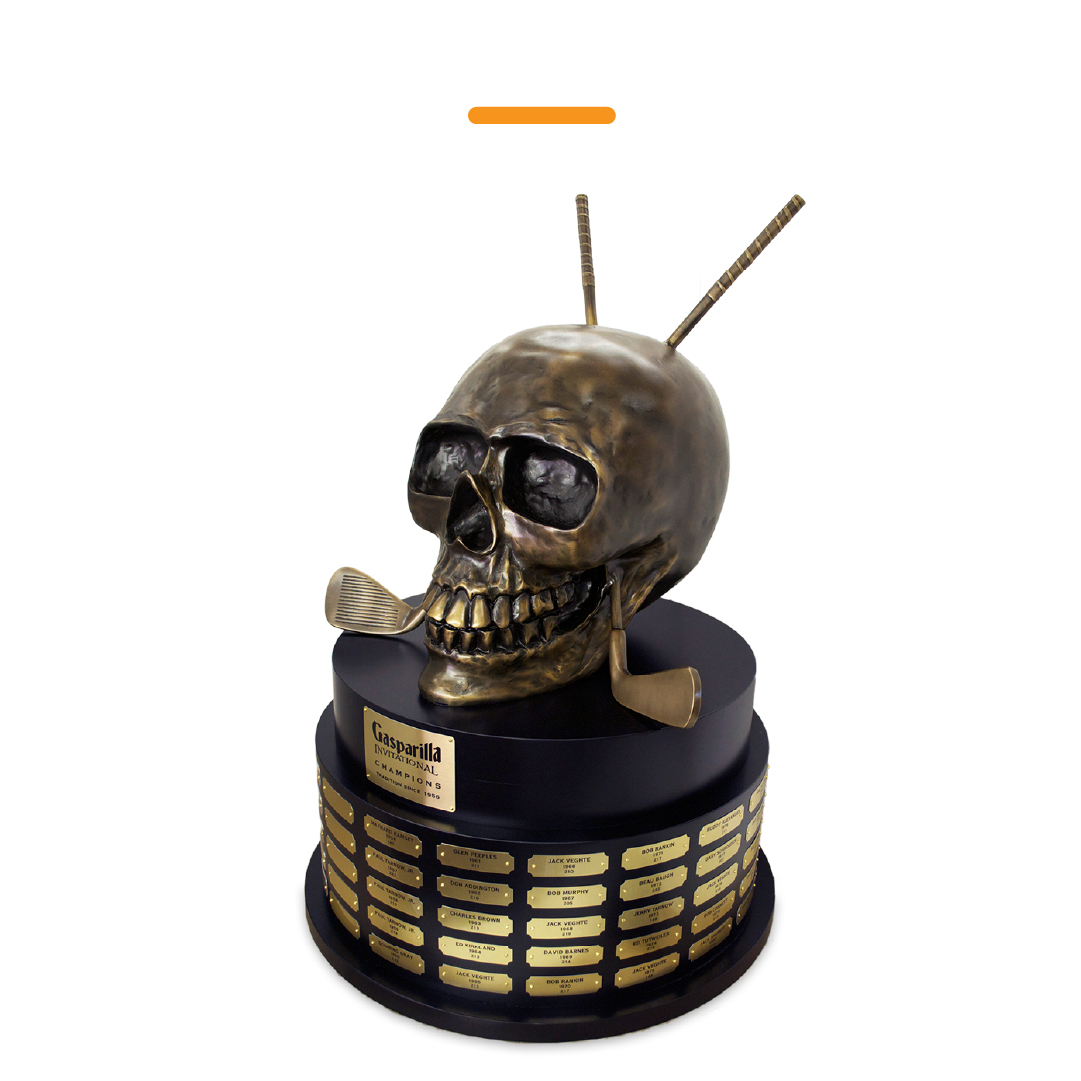 We have had the honor of designing a highly coveted perpetual award for the Gasparilla Invitational for more than 40 years. The event has been hosted in Tampa, Florida each year since 1956 but has a history that dates back even further. Once known as The Gasparilla Open, the prestigious golf tournament was played by both professional golfers and amateurs. In recent years, it has become the premier golf event for amateur sportsman in the Tampa Bay area. The custom award weighs in at 150 pounds. It is 40’’ tall with a 25’’ base. The trophy allows new winner’s names to be engraved on custom nameplates around the base.

Another popular perpetual award in the Tampa Bay area is one we designed for the Schwarzkophf Memorial Sporting Clays Classic. After retiring from his

position as CENTCOM commander at MacDill Air Force Base, General H. Norman Schwarzkopf Jr. began participating in sporting clays events. Each year, the Tampa Bay Sporting Clays host an event that benefits a charity that is close to the general’s heart. Over the last 20 years, participants in the event have raised over $1 million in support of The Children’s Home, an organization dedicated to sheltering abused and neglected children. To recognize the winner of the event, Levy created a trophy featuring a classic “winner’s cup” design. A photo of the famed general is at the base of the cup. Its perpetual design allows the Tampa Bay Sporting Clays organization to honor the winner of their annual tournament by adding a new silver nameplate at the square shape base.

Established in 2015, the Palmetto Bowl is the new name for the annual football game played between South Carolina and Clemson. One hundred and twelve “bowls” have been played without a modern trophy to award the winner. Levy Recognition had some great ideas for a perpetual award that would represent the game’s history as well as the rival teams. The trophy features South Carolina’s state tree, the Sabal Palm. Each of the rival schools is represented by alternating school logos at the base of the tree. Once a winner is crowned, a new plate name is engraved at the base, with the trophy rotating between schools each year. 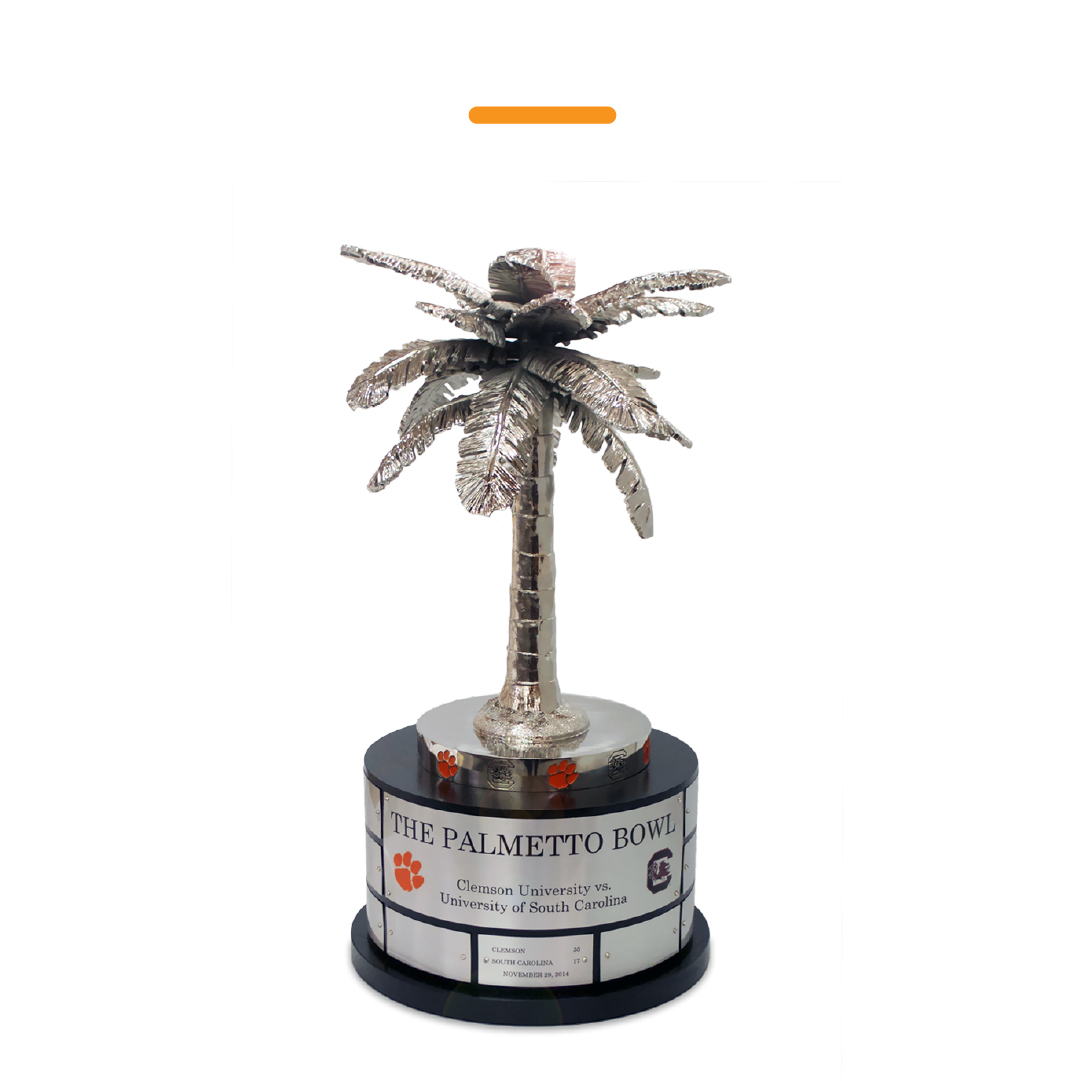 Whether in the workplace or in sports, perpetual awards offer grandeur in appearance and remind people of the hard work and commitment of the award recipients whose names are forever a part of the award’s history. No matter how big or small, every achievement deserves its moment to shine. Perpetual awards allow organizations to recognize those achievements in a big way.

Levy Recognition has the expert design experience to help you develop a custom perpetual award that is sure to inspire your organization for years to come. Imagine the feeling you will get the first time you add a recipient’s name to the award; the excitement it will bring to everyone in the room. Share that feeling.

Contact Levy Recognition about designing a trophy your employees will be proud to hoist again and again.

# Custom Awards
Safety in the Workplace